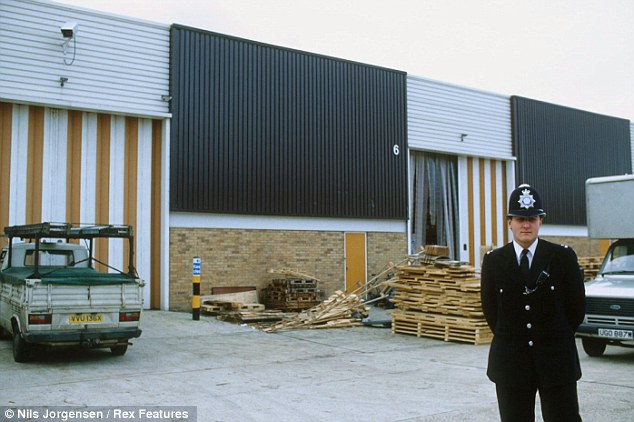 Labeled the crime of the century, the Brink’s-Mat robbery occurred on November 26, 1983. On that fateful day, six robbers broke into the Brinks-Mat warehouse at the Heathrow International Trading Estate in West London. The six are said to have gained entry to the warehouse through Anthony Black, the warehouse security guard. Once inside, the robbers doused the staff in petrol and threatened to burn them alive if they didn’t reveal the vault’s combination numbers.

The six expected to get away with £ 3.2 million in cash but, on opening the vault, found three long tons of gold bullion and £26 million worth of cash, gold, and diamonds. Two days later, a couple saw a white-hot crucible being used at a neighboring property near Bath, Somerset and reported it to the police since they suspected it might be linked to the robbery. The police didn’t adequately follow up the report but raided the premises 14 months later. John Palmer, the person occupying the property, later confessed he was unaware the gold was linked to the robbery and was later set free.

Following a tip-off from Black’s brother-in-law, Brian Robinson was arrested in December 1983 in connection to the robbery. The police later made a connection between Brian Robinson and Anthony Black, who was arrested and later confessed to aiding and abetting the robbers by providing them with a key to the premises. One of the six robbers, Perry recruited an expert known as Kenneth Noye to dispose of the gold. However, the movement of large sums of money alarmed the police who arrested Noye.

Even though much of the gold wasn’t recovered, McAvoy, Black, and Noye were arrested and served time in prison for the robbery. George Francis, who was part of the robbery, was later murdered by McAvoy for supposedly using up McAvoy’s share of the money and gold.